So, here's a surprise - the Daily Mail pissed me off today. That last bastion of all that is great and good in the world, the Daily Mail Reporter, wrote an article (istyosty link) entitled:

Now, ignoring the obvious Google-bait headline (really, there is no need to include Angelina Jolie in the headline other than that) - I had a few problems with this article.

Firstly, as per usual, there was no citation of the source research, so there's no way to check whether what they're saying is accurate. I looked for it online, but I can only refine search parameters so many times before I accept I am fighting a losing battle. If anyone can find it for me, I will love you forever. This also means we have no way of knowing the sample size of the survey, or how the sample was selected (they could have just asked ten people down the pub, or asked a thousand people using stratified sampling). Crucially, it means we don't know what questions were asked of the participants in the 'study' (the sarky inverted commas will become clear in a minute).

I may be getting ahead of myself here. Our intrepid Daily Mail Reporter cites several 'findings' from the research, these being;
Now, do you see my problem with this? It is totally unclear what they asked. It's unclear what even appeared in the 'study'! For instance, with regard to finding number 3, did the study ask the men to list the three characteristics they found most attractive, or were they part of a limited list of choices? Was the question even asked, or is the Mail just extrapolating characteristics it thinks common of "high-flying females"? See? This is why if you don't link to primary sources you are dead to me. Now, all these problems are not to mention the problems inherent in any study that relies on self-reported behaviour. I think I've established that I am not a fan of this 'study'. However, I appear to have diverted myself, as there are much more pressing problems with the article.

My second bone of contention with Daily Mail Reporter's fine piece is that, like pretty much all their stories of this ilk, it's essentially just a glorified advert. In this case,


"The research marks the launch of the new computer game The Sims Medieval.

Stuart Lang, marketing director for The Sims Medieval, said: 'It's interesting to see the change in appeal of men being attracted to high-powered women and more dominant bad-girl types.

'It shows the evolving position of women in society and the developments of their strength.
'These results show that there is still an element of Middle Age mentality in today's society, with women being drawn to roguish characters.'"

Quite. And when I say 'quite', I mean 'a quite utterly bloody pointless PR exercise'. Never mind though, the Mail have gone for the double in shameless plugs with this article - they also draft in self-styled "relationship expert", Jo Barnett, to help analyise the findings! (Seriously, if you only click one link on this post, click that one - her site is hilariously bad). She says:

'Finances are harder than ever, and men who may once have been scared of a powerful, successful woman, have wised up.

'They are now embracing it, as someone who is financially independent is a very alluring option.

'Also, media has sold us the powerful, executive woman as a very sexy image today.

'Women who have it all have a buzz about them, they are not so readily available and the guys flock to them.'

'Women are looking for the buzz and excitement to distract them from the mundane life of work, kids, usual. [Because that's all women do. They have no hobbies or interests of their own. They need a man to show them a good time.]

'The 'bad boy' is a challenge, it works the same for women as it does for me, the harder the game, the more we want to play.

'Bad boys have that sex appeal that some of the chivalrous men just can't muster, it's the belief they have that they can play the field and get away with it.

'They have the ability to lay on the charm and we never quite know if they are telling the truth, but it's fun while it lasts.'

I'm not quite sure what to make of this, really. I mean, I'm always fairly skeptical of these self-styled experts to begin with (of course, if Barnett actually has a PhD. in 'dateology', I'll take the comment about her being 'self-styled' back), but when they start talking in absolutes like this, it really gets my back up. No, not all women like 'bad boys' - most women (and men) don't even have a 'type'. People like people, not disparate groups. Most people don't even fit into a type themselves! Also, I find her comments about men liking powerful women because the media portrays them as 'sexy' distinctly... uncomfortable. But yes. Absolutes are bad, OK kids?

Also, don't get me started on the complete and utter disregard for what LGB people want. I know, I know, it's the Mail, and they're terrified of TEH GAYZ, but still - it should be said.

This is my biggest problem with this article (and the main reason I decided to write this post - the rest of the stuff I have written are minor gripes that I could have ignored. This, however, takes the bloody biscuit. Not only does it take the biscuit, it eats it in front of your face then spits crumbs at you while it tells you how nice it was to eat your biscuit.) is this: 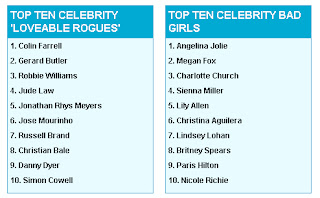 Yes. That's right. In 'Mail-land' (surely the worst place in the entire known universe, no?), if you have a penis and have sex and tattoos, you're a 'lovable rogue' - but dare to do those things while being in possession of a vagina, and you're a bad girl*.

"Yeah, hello, is that the Mail? Decent people's sense of gender equality speaking here. I appear to have got lost on the way to your offices. Is there any way you could give me better directio.... What's that? I'm not welcome? Oh."


Yes, I know I shouldn't expect any better from the Mail (although I always think I can't expect worse, and then they surprise me), but that doesn't mean I shouldn't be bothered when things like this get published. Not only is it hateful and spiteful, it's also harmful, and apathy is not the answer.

*Transgender people do not exist in Mail-land.
Posted by Forty Shades Of Grey at 20:44