Now, let me start by saying that I feel terrible for this child. I have a sister who just turned seven, and if I ever found out that she felt the same way as this girl, it would break my heart. But for all Epstein's handwringing, this whole article is one of the most disgusting I've read in a long time. It's time to crack open the trusty red pen, and delve into the horrors of the article proper:

Pirouetting out of the front door, my six-year-old daughter called to me over her shoulder: ‘Bye Mummy.’ Off she went, on her way to school with her father, her little Hello Kitty satchel bouncing on her back, a fluffy Alice band holding back her still baby-soft brown hair.

The youngest of my four children — the other three are boys — Sophie conforms to every little-girl stereotype that there is. And as I went into her room to tidy up the whirlwind she had left behind — rainbow-coloured bobbles scattered on the floor, dollies positioned at a tipsy angle across her bed — I chuckled at the pink and innocent world occupied by my baby girl. Let's leave this for the moment, shall we? I think the reason that she conforms to 'every little-girl stereotype will become clearer as we go on...

And then I spotted her diary next to her bed. Sophie had told me quite earnestly she wanted to keep one and, as a writer myself, I was thrilled at this early interest in chronicling her world.

I imagined it would be crammed with entries about getting her new gold sparkly shoes from Monsoon and how excited she was that we were going to make a teddy bear at the weekend.

I know that reading someone else’s diary is the ultimate act of betrayal. But I couldn’t resist taking a peek. After all, Sophie is only six. There were hardly going to be any earth-shattering confessions lurking between the pages of her pink Barbie diary, were there? Epstein says that reading her child's diary is the 'ultimate act of betrayal'. I'd go a little further and opine that publishing it in a national newspaper might go a BIT beyond that.

How wrong I was. Forget soft-focus innocence, as I opened the front cover I froze in shock.

Page one read: ‘I am a stupid, silly and ugly girl.’ The harsh words of self-criticism jarred painfully with her large, childish handwriting.

As I turned the page, there was more: ‘I looked horrid in my brydsmade [sic] dress’; ‘I looked fat and ugly at school today’; ‘My plaits looked stupid today . . .’ And so it went on, page after page of blistering self-recrimination.

I slumped on the bed in shock at this torrent of low self-esteem. How on earth had this happened? I'll give some clues to this at the end of the fisk.

Sophie is my baby, a beautiful little girl. She’s popular, seems enduringly chirpy and is a lovely, giggly little chatterbox. She is frequently invited out to play or has friends to our home. Hardly the recipe for an outpouring of bleak female angst. Is it possible that she's been taught that she must be chirpy, giggly and outgoing all the time, to be a 'proper' little girl?

Was it my fault? Or is the lack of self-esteem so common in women innate, something passed on unknowingly from each generation? Had she heard me on the phone moaning about feeling frumpy and overlooked, as I did the other morning? Yes. Because only women ever feel self-doubt. (This being Mail-land, then, as per usual, trans people don't exist).

Had she spotted me standing in front of my bedroom mirror, critically examining my reflection in a new dress and wondering aloud if I looked, to use her word, silly?

If so, then, as a revelation, this diary was devastating.

Even more so, because I never imagined my daughter would feel this way. She loves performing, is confident and is, above all, a very lively little girl.

Spool back several years to when I became pregnant with Sophie. How I yearned for a daughter. Sure, I adored my three sons. But I felt my femininity had been cut adrift in a household peppered with headless Action Men, brash talk about toilets, and a Himalayan range of muddy football boots by the back door. My problem here is that Epstein clearly points out her own damn problem. She had three boys, who were all couched in hegemonic masculine culture. She wanted a little girl to indoctrinate (and yes, I bloody mean indoctrinate) into a hegemonic feminine culture. If she didn't subscribe to such binary gender roles (i.e. these are boy's toys, those are girl's toys. These are boy's characteristics, these are girl's characteristics), and obsess over her daughter's appearance, then would her daughter really obsess about her appearance so much?

On the other hand, my three boys (Sam, now 18, Max, 15, and Aaron, 12) never suffered with self-doubt. They readily accepted whatever clothes I bought them at Sophie’s age without questioning my choice. (My daughter frequently takes an arbitrary dislike to the things I bring home, on the basis she won’t look nice in them.) Just a point - that's not an 'arbitrary' dislike. It's a specific dislike brought about by her own body insecurities. Instead of just 'bringing' her clothes home, why not discuss what your daughter feels comfortable wearing?

A straw poll of friends who had sons and daughters revealed that their little girls were without question more complex, difficult, and hard to please.

Little girls can also be incredibly bitchy to one another — perhaps another toxic cog in the revolving wheel of female self-doubt. I’ve been genuinely astounded at some of the stories I’ve heard.

One friend confided that her eight-year-old had been squeezed out of a hitherto fairly tight-knit clique because she refused to worship Justin Bieber.

I’ve even seen some unpleasant adult fault lines in Sophie’s own behaviour. I remember being at a wedding with her when another little girl came in wearing a gorgeous party dress. Sophie’s eyes narrowed. Her envy was palpable. She leaned into my ear and whispered imperiously: ‘She looks awful.’ I wonder just where she got that from? Well, I'll answer myself at the bottom of the fisk.

To be fair to Sophie, it is an enduringly female trait to deliberately adopt a negative stance in the hope it will trigger a positive one. When I say to my husband ‘Do I look fat in this dress?’, I want him to say: ‘No, you look gorgeous.’ I probably don’t even really think it myself. But I need the affirmation, even after 20 years of marriage. No, it's not. Does Epstein seriously think that men never fish for compliments? (Again, Mail land, no consideration of trans people.)

Was Sophie writing these things in her diary because she believed them or because she was mentally trying to negate them? When Sophie got back from school, I tentatively asked her about her diary. ‘Why did you write that you were stupid and ugly?’ She wrinkled her brow for a moment. ‘Because I am.’

I persisted and asked if anyone had called her these names. No, it seemed, they hadn’t. So why then? ‘Oh, Mummy,’ she said, as if slightly irritated with my line of questioning, ‘It’s really simple.’

She then reeled off a shopping list of things she’d like to change about her body: her legs were too short, her nose was too big — it’s actually the size of a chocolate button — her eyes were ‘wide like an elephant’s’, her tummy was too podgy (it’s tiny) and her hair drove her mad because it was too floppy.

Reading Sophie’s diary has been a salutary lesson. It’s taught me how my daughter — a bright little girl who hops and skips through life — is still so vulnerable to the toxic self-doubt that so often infects the feminine psyche. Again, not just a female thing!

It’s bad enough we women seem to be hard-wired this way — even worse if we pass it on to our children. I’ve since tried to tell Sophie she should put positive things in her diary and am making an effort to stop myself from being unduly self-critical in front of her. Right. Instead of trying to make her feel more positive and allowing her greater access to role models and things she feels good about, Epstein just tells her daughter to 'be more positive'. Because that's just it. She should be all sweetness and light and happy all the time because THAT'S WHAT LITTLE GIRLS DO, OK?

I took a peek at her diary the other day. The flinty comments about herself had gone. Instead she had written ‘T is a fibber. She said she has an oh pair (sic) and she has not’.

Oh dear, it seems Sophie has trained her lens on someone else instead. I’d better brace myself for a whole different lesson.

Throughout her piece, Epstein wonders where her child has got this self-criticism from. Well, I honestly don't have a clue. 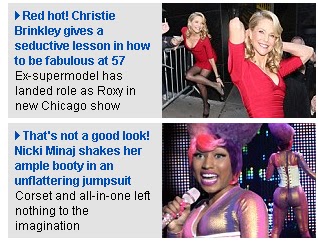 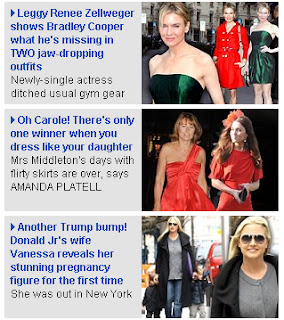 Oh dear. Some sidebar headlines from Epstein's article seem to have edged their way into my blog post. However did that happen?

Leaving all this aside, what is wrong with Epstein. Her daughter admits some pretty terrible self loathing, and her reaction is to write about it in a national newspaper, that publishes it's articles on the internet, with her daughter's real name and pictures? I mean, wow. That's pretty appalling. How will her daughter feel about this in ten years time? How does she even feel about this now?

And I'd bet my right arm that the people who read this article on the Femail site won't be thinking "what a terrible indictment of the early-onset problems of making children conform to fixed gender roles". They'll be thinking something a bit like:

Ah, it's OK then. She's pretty! Why would a pretty person ever need to feel bad?
Posted by Forty Shades Of Grey at 08:17