On Laura Gabel and transphobia in 'alternate' scenes

The singer of Against Me! has come out as transgender in an interview with Rolling Stone. She announced she's about to start hormone and electrolysis therapy soon and wishes to be known as Laura Jane Grace, and will remain married to her wife Heather. YAY HER.

I mean, we don't need to know all that. I don't really care about her hormones or her hair or her relationship. All I need to know is her gender is female, and what pronouns she wants to use, so that if I'm writing something about her I get it correct. The rest of it is none of my damn business or yours.

I'm thrilled for her that she's happy and that she's managed to come out and that her wife supports her. Hopefully her profile will make it easier for other people in her situation to feel able to come out, and make their transitioning easier because others are more aware of the issues.

But then I made the mistake of going below the line on PunkNews (I'm not linking to it, because fuck PunkNews), and my hopes... didn't so much as wane as were beaten to death with a big stick. When I looked, there were around 500 comments, each falling into one of five categories. I'll list them and discuss them separately:

Firstly, there were some good comments. And by 'good comments' I mean 'fully supportive and used correct pronouns'. Unfortunately, there weren't many of those, but they were definitely there. Secondly were the people who were broadly supportive but kept saying 'he, him, s/he?' etc. This was probably about half of the commenters. I get it, you think this is a Good Thing, but it really isn't fucking hard to say 'she', or whatever the person wishes. I know not everyone is clued up on trans issues, and at least you're trying...but you don't get a cookie.

Then cometh the trolls. The first camp under the bridge insisted on referring to her as 'he', because BIOLOGY, YO. The one's who were, y'know, just 'keeping it real' and telling the 'truth'. Cuz like, it's just 'not natural'. And as we all know, punks are all about natural. That's why none of them ever dye their hair, or get piercings and tattoos....OH NO WAIT.

And then there were the second type, who were Against Me!'s 'biggest fans', but were either a) 'worried' that hormone therapy would make Laura's voice change and OH NOES WHAT SHALL WE EVER DO, THERE'S NEVER BEEN ANY GOOD WOMEN VOCALISTS IN PUNK EVER or b) so totally fucking 'disgusted' that they just wouldn't ever be able to listen to the music ever again. Poor babies. Just to clarify, here are some good reasons to be so disgusted you don't want to listen to music you enjoy: the singer is racist/sexist/homophobic/transphobic/ableist/a capitalist, and you find their views so objectionable it stops you enjoying their music (see me and Amanda Palmer). Here are shit reasons to stop listening to music you enjoy: you give a fuck about what's in the singer's pants. GROW UP. Newsflash: If a singer's gender identity stops you being a band's 'biggest fan', you're not their biggest fan.

And finally, we had the dudebros who managed to make this all about their dicks. Now, amazingly, these people managed to (presumably unintentionally) completely transcend cissexism, and just go straight back to regular sexism. You see, the problem these guys have, the deep, burning problem that's just so fucking great that they must shout about it on the internet is that they won't fancy Laura as a woman. Someone call Amnesty International, this is truly the greatest human rights violation of our time. Apparently unconcerned with Laura's face/clothes/body when they thought she was a dude, this is now what is actually important. Because as we all know, women only get into punk for bonerification purposes, and if a woman does not immediately make the crotch of your jeans burst open at its seams, she's not doing her job.

So, a message to anyone who recognises themselves in those latter categories: 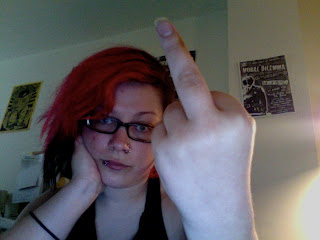 Punk's supposed to be about tolerance, acceptance and embracing other people's lifestyles, and more than anything - it's about choice. If you're going to be a shit to people because of their gender, their sexuality, or any other expression of themselves, you're about as punk as Nick Clegg. Ooh, you want to preserve 'traditional' repressive notions of fixed binary gender roles, how fucking radical. Go fucking cut your hair, start listening to Skrillex and shit off out of my scene, you posers.