A lot of people point out that the Mail writes scare stories about Facebook because it increases their online traffic. I've decided to try increase mine, but without involving piss-poor journalism (mainly because I don't get paid, so I can't be a journalist).


Anyway, this is on the front page of the Mail today:

"How many more child victims of the Facebook sex gang?"

I'm going to take my trusty red pen to this, but not much, as it's fairly self explanatory. (Facebook)

How many more child victims of the Facebook sex gang? Parents of 16,000 children get warning letters after attacks by internet predators

By Sam Greenhill, Stephen Wright and Ryan Kisiel Three people were paid for writing this, and I'm a bloody barmaid.

* Man, 19, arrested in connection with investigation
* Police praise 'bravery' of 20 victims who came forward
* All victims, aged between 12 and 15, knew offenders
* Police investigate whether children were groomed on web

Parents of 16,000 pupils have been sent stark letters warning that internet predators may be trying to groom their children for sex. Online, the Mail reproduces the letter about halfway down the page. I'm going to reproduce it here. 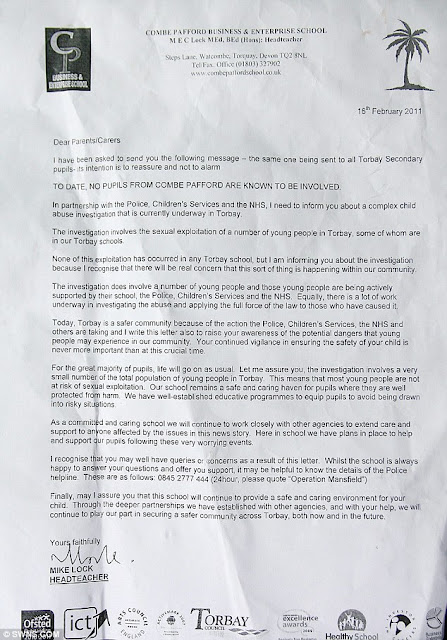 Find me the word "Facebook" in that, and I'll give you whatever the Mail journos earn for finding it.


Police believe at least 20 pupils – and fear as many as 50 – have been ensnared on Facebook and other social networking sites over the past three years.

The victims are thought to have been plied with drink and drugs before being abused or raped. Some were as young as 12.

Yesterday council staff took the extraordinary step of warning parents of pupils at 14 Devon secondary schools that it was no longer safe for their children to go out alone. Where?

In a bombshell letter, signed by headteachers, parents were told there was no need for alarm. But it added: ‘The safety of your child is never more important than at this crucial time.’

It revealed police were investigating the ‘sexual exploitation of a number of young people’ and officials wanted to ‘raise awareness of the potential dangers’.

The mass mail-out was sent to pupils at schools in Torquay, Paignton and Teignbridge.

‘We are saying children need to be careful and be vigilant. If they are going home, they should go straight there.’ She urged parents: ‘Just watch your children.’ I can't find this online but just note that she SAYS NOTHING ABOUT FACEBOOK.

All known victims attended three of the 14 schools and yesterday police arrested a 19-year-old man on suspicion of child exploitation.

Another man is being hunted by Devon and Cornwall Police, which has launched a major child abuse investigation codenamed Operation Mansfield.

Detective Inspector Simon Snell said the victims were predominantly girls – but also boys – aged between 12 and 15 and that two were in care.

He said the offenders had befriended their victims first rather than snatched them off the street.

‘We are keeping an open mind with regards to Facebook, Bebo and other internet sites.’ This is their link to Facebook.

‘We have interviewed around 20 children so far with regard to offences connected with child exploitation. We may deploy officers to interview further children.’

Police have dismissed links with other inquiries of a similar nature such as  that of Asian sex gangs in the Midlands and North. Because only people from Asia abuse children, right?

The inquiry started last week after children came forward to childcare agencies which then alerted police.

Officers could not confirm the setting in which the abuse took place, but said they wanted to make clear it was not in any of the schools.

Mr Snell said the offences included indecent assault and rape and could go back two or three years.

He paid tribute to the victims, saying: ‘We are dealing with children from all different backgrounds and social groups. I respect their bravery – they have been very brave coming forward to us.’

‘If the letters have alarmed parents and alarmed victims then I can only apologise on behalf of my organisation. That was certainly not the intention.’

The decision to send out the letters was taken by two local councils.

Mr Snell played down the dangers of walking home: ‘Parents need to know that their children are completely safe to walk the streets of Torbay and can return home from school completely safely.

‘It is simply not the case that a group of paedophiles is grabbing children off the street, I need to emphasise that.’

Police sources said none of the attacks were random and many of the victims were vulnerable children, some of whom had run away from home and had fallen into drug use.

Mr Snell apologised if the letter, which was sent out by each school and signed by its headteacher, had caused panic. ‘I need to clarify the reason we sent these letters out. We are reacting very quickly to intelligence we received from lots of agencies,’ he explained.

‘The letter was sent out to reassure parents and to make sure that they didn’t hear on the grapevine about the police investigation.

‘The whole idea was to tell parents there was an investigation in progress and we are very limited in what we can say.

But parents spoke of their fears after news of the investigation emerged. Sharon Houghton, who has children aged 11, 13 and 15 at different schools in Torbay, said she and her husband Ray were worried and in the dark.

‘It is obviously very concerning and we have been given very few details about the investigation,’ she said. ‘I am now thinking I can’t let my kids go out. I want to know where they are at all times.’ I appreciate that Mrs Houghton is worried, but really? The police and council have reacted very quickly to this, and are to be commended for their actions in alerting parents to the investigation to stop tittle-tattle and unnecessary worry.

One mother of a 13-year-old girl said: ‘We’ve been told not to let them on these sites like Facebook because they could be meeting up with strangers.

‘These older boys seem friendly and nice on the internet but they are a real threat.

‘I’ve talked to a lot of the other mums and we’re all going to stop them going on there.’ Again, I appreciate this woman's concern, but surely the answer isn't to ban Facebook, but to set their child's privacy settings to the maximum and tell them not to speak to anyone they don't know in person?

Another mother added: ‘I am worried about the internet and when we get home we’re going to go through all her online friends and see who she has met in person and not just on the computer.’

Special assemblies were held to warn children to be vigilant. Carol Tozer, director of children’s services in Torbay, said a team of eight social workers had been drafted in.

Child sex abuse takes place. This may or may not have occured after grooming online. Council and police commendably keep parents up to date on the investigation. Admittedly send slightly mixed messages about how to keep children safe. Mail decides they are in the wrong for....something. Also, FACEBOOK.

Why is this on the front page of the Mail? There is no 'Facebook sex gang'. The Mail can't even make up it's mind as to whether the Council are wrong to "worry parents" by alerting them to the investigation, or whether they need to be told more. Articles like this are the reason I drink.


*If I don't get a million hits now, the theory about the Mail just trying to increase online traffic goes out the window, and we'll be forced to conclude that they really are just that stupid.
Posted by Forty Shades Of Grey at 23:32