Why I Am So Angry

Yesterday someone linked me to this, a poster that they thought I'd like. I do like it.  (Click to make BIG - also, as I understand, it's free to print and reproduce it, and you are encouraged to do so) 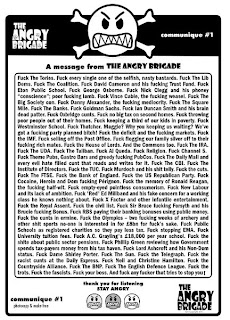 But I'd like to add a few things to that, because it doesn't cover nearly half the things I feel angry about on a daily basis. So, here goes:

"Fuck patriarchy. Fuck rape culture. Fuck victim blaming, fuck slut shaming, fuck any bastard that would choose a clump of fucking cells over the life of the woman that hosts it. Fuck body fascism. Fuck lads mags. Fuck womens mags. Fuck objectification. Fuck saying a woman is empowered because you give her money to conform to your misogynistic ideals. Fuck binary gender norms. Fuck not citing your sources and churnalising some bullshit pseudoscience that landed on your desk. Fuck all pseudoscience. Fuck homeopathy, fuck acupuncture, acupressure, acu-whatthefuckingever. Fuck anything not proven by re-testable science. That includes God, you small-minded fucks. Fuck anyone who would use an imaginary sky pixie to push their bigoted, money-grasping agenda. Fuck economic libertarians, the selfish cuntpricks. Fuck EU sceptics, fuck climate change sceptics. Fuck James fucking Delingpole and every lie he's ever published. Fuck Littlejohn, the fat prick, railing against how bad it is in the UK from his mansion in fucking Florida. Fuck Melanie Philips, the delusional bitch. Fuck Philip Davies, the rent-a-gobshite. And fuck Nadine fucking Dorries, the evidence-denying, lying fucking shitwhore. And Frank Fields. Who thinks women are too stupid to choose but bright enough to raise kids. Fuck Eric Pickles. Fuck Theresa May. Fuck the police, fuck the riot squad, fuck the TSG, the violent twathounds. Fuck the CPS. Fuck the courts. Fuck the prison system. You think it works? Meet evidence. Fuck ATOS. Fuck anyone who would punish the worthy sick for the greedy well. Fuck racists, the fucking chodes. Fuck war for oil. Fuck the war on terror, fuck the war on drugs. Fuck The Big Questions. Fuck Question Time. Fuck Prime Ministers cocking Questions. Fuck giving my time to right-wing reactionary fucknuts. Fuck Moral Maze. There ain't nothing moral. Either you're a weeping dickshit or you're not. Fuck those who piss about the 'nanny state' because they're too fucking thick to have grasped metric in over 40 fucking years. Fuck those who think the ECHR is part of the EU. Fuck those who think that having your bins collected once a week is more important than foreign aid. Fuck people who want to take away minimum wage. Fuck the bastards exploiting the situation the banks gave us and calling the unemployed lazy when there's five unemployed to every job vacancy. Fuck unpaid internships. Fuck gap years. Fuck mummy and daddy paying for you to climb the corporate ladder. Fuck you bastarding fuckers who make my head want to explode every time I remember every shitty thing you've ever done."