Creeping Stupidity (the day the racists came to town)

This post was written with Chris from Good Lookin' South. It was a busy day yesterday, so we can only report what we saw. This article from Schnews mentions some things we didn't see.


The day started bright and early yesterday (by a Sunday's standards) when we arrived in Brighton city centre at half eleven in order to counter-demonstrate against the 'March for England' (who are basically the EDL in a bad wig). We met up with some like-minded anarchists and assorted anti-fascists at our tactically chosen meeting point of The Clock Tower at the bottom of Queen's Road, decided upon for its difficulty to kettle and central location meaning it was easy to quickly reach any of the possible routes the march was due to take, and were disappointed to only see about 30 anti-fascist demonstrators there. We had a quick sit down and a cigarette while we shared updates and sightings of police and fascist activity with some friends in other locations around the city and found out what was going on. While we were doing this, a very suspicious-looking woman with a long lens camera started taking pictures, ostensibly 'of the [police] horses', but unless any of us had police horses on our faces, I remain doubtful and await my imminent debut on Redwatch. A few minutes later some friends passed us, trailing some known Portsmouth EDL faces. The EDL (about 3-5 of them) squared up to our friends when they realised, then settled down in the Wetherspoons on West Street, presumably to defend cheap lager and bacon butties from any roving Muslamic Ray Guns.

When we regrouped, we decided to go meet up with some more people we knew who were further up Queen's Road (closer to the fash's starting point of Brighton Station), and were heartened as we turned the corner to see about 400-500 counter-demonstrators lining both sides of the road, with UAF (bless 'em) kettled right next to the station. We went as far up as we could without hitting police lines and waited for the racists to start their shuffle against Islamacism.

Just before 1pm, with knuckles scraping gleefully on the floor and sunlight glinting off their heads, the March for England finally set off considerably later than they had intended. With the patriotic zeal that can apparently only be mustered by the imported lager they were swigging, around 90 of them came lurching out of the station, determined to defend our shores by wearing stupid 'English Flag' hats and trying to subtly sieg heil. This is not an action that lends itself very well to subtelty, incidentally. 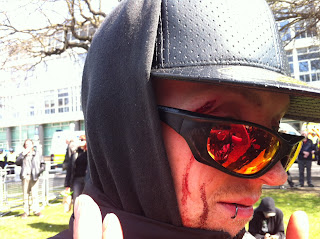 When they set off, groups of anti-fascists ran into the road to try and block their path. In what can only be described as disgracefully heavy-handed facilitation of racists by the police (quelle surprise), mounted officers began chasing individual protesters with horses (video from slightly further along than we were, showing just how bad the police were). One guy we met later in the day was chased by a horse then dragged aside by four cops who twatted him in the face with a baton, leaving a deep gash right next to his eye (see right - click picture to make it bigger and see just how bad it is).

Those of us lining the road managed to get pretty close to the fash, so we were able to call them arseholes to their faces, which was nice. They were in a moving kettle, protected by a double line of police (including officers from Kent, Surrey, Thames Valley and the Met). We shouted 'racist scum, off our streets' and followed them along the route while they grinned and tried to rub two braincells together to come up with a chant of their own (I didn't hear them chanting once, all they were doing was telling anti-fash to 'fuck off' and grunting a bit). At one point on Queen's Road their lot were throwing bottles at counter-protestors, while officers with their back to them were threatening me for giving racists the finger.

The march was unexpectedly re-routed down Church Street, which is about halfway down Queen's Road, to avoid the rest of the counter-demonstration. Thankfully, that area of the city is built in parallel blocks, so we were able to run down the next road and meet them. Church Street is fairly narrow, and again we trailed them, shouting and taking the piss out of them, while they showed considerable bravado from behind their publicly funded protection. One of their 'security' was trying to stare me down while his 'brave lads' sieg heiled behind him. He couldn't explain what nazism has to do with 'English pride', but I also doubt he could tie his own shoelaces without a map.

All of a sudden, there was a bit of confusion, and we realised that a load of our lot had run ahead and had spontaneously constructed an impressive barricade of recycling bins and barriers across the width of the road. Which we were on the wrong side of. After some quick fence-hopping we had rectified this problem, only to face the hairiest part of the march. The police and the fash reached the barricade and started trying to push through it. The police put horses at the back of us, and seemingly their most thuggish, clearly-spoiling-for-a-fight officers at the front of us who started pushing us and hitting us with batons to make us move back. Into the horses. Presumably we were supposed to levitate away? All the while the fash were throwing glass bottles at us and the walls we were being pushed into so we'd be showered with broken glass. Some of the anti-fash were throwing things too, while the anti-racists were taking care not to cause the horses any more discomfort than the police already were, the facists had little concern for animal welfare and were happy to throw broken glass in their path. We finally reached a side street and escaped down it, doubling back to meet the rest of the demo further down the road. Their march continued in the same manner the whole way down Church Street, taking about an hour to cover what would normally take five minutes.

When the racists and the police (although the two terms are not mutually exclusive) reached the bottom, they turned off into Victoria Gardens, where the Eddles were put in a pen which, embarrassingly, they only filled about a fifth of. There were at least 600 counter-demonstrators in the rest of the park (although various sources have put our number anywhere between 500-2000, so it's anyone's guess. We outnumbered them by at least 5:1 at any rate). The cops formed a ring around the fascist's pen, so we couldn't see them any more (thank fuck), but we carried on singing 'We don't give a fuck where you're from' and 'If it wasn't for the coppers you'd be dead'. We had also cut them off from the provided portaloos, which they required a police escort to access, and if the advertised speeches took place we certainly didn't see any of it, since they would have been drowned out by non stop oppostion. After a while we got bored of taunting the 'master race' and it was sunny so we went to have a dance with the Punx Picnic sound system. There was a beautiful moment where a big group of us were dancing to Bastard Coppers by The Filaments in front of a line of riot cops who were clearly fuming at their inability to take action because they had to defend the scum. It brings a tear to my eye just thinking about it. Anyway, we had a really nice time listening to music and sitting in the sun while the fascists just stood around looking nonplussed (more so than usual), and we showed them how a demo should be done. They didn't even bring anything that makes noise, for crying out loud! All they had was a couple of flags and some kind of papier mache affair on sticks, which was clearly constructed by the EDL's Red, White and Blue Peter division. At about 3pm it was clear our work was done as the police were preparing to hastily escort the fascists back to the train station so they could return to wherever it was they came from, a lot of counter-demonstrators had left and we could sense the police closing in to try kettle us in order to facilitate the scum's escape, so the punk bloc made a getaway to go put on the final day of the Punx Picnic.

Later we heard reports of three people arrested, but have no idea who they are or what they were arrested for, so can't comment on that. We also heard from reliable sources that the racists had been allowed in The Marlborough and Belushi's (two more pubs for the Shit List), but were chased out of The Fishbowl by the great regulars there who didn't fancy sharing a pint with nazi scum.

All in all, it was a good demo, for a great cause. Racism has no part to play in our country, and the sooner that the fascists realise they don't speak for anyone apart from them and their tiny-minded group of mates, the better. These streets are our streets, and they don't belong to bigoted scum like them.

The Eddles have also provided their 'unique' takes on the days events.

Finally, I've got to give a big shout-out to Leon McCreery - known fascist with terrorist connections who's been repeatedly arrested for his violent actions on demos and away from them - for making me laugh more than I have in ages by trying to report me to the Sussex Police Twitter account because I'd been tweeting about the march, and then accusing me of 'racism against police' because I'd used the hashtag #ACAB while tweeting about the police trying to push us into the path of horses. Oh, and he also called me a 'violent moron'. Genulolz. 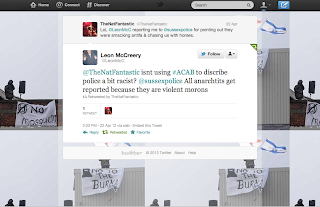