Help Save The NHS

The Health and Social Care Bill passed its third reading in the House of Commons today, by a majority of just 65. This means that the next stage of this bill is for it to be debated in the House of Lords. If it passes in the House of Lords, it will become law, and our NHS will be sold off piecemeal to the highest bidder. So, here's what I want everyone to do:


1: Go to Going To Work and adopt yourself a peer. It's like having a Tamagotchi, but they don't die if you forget to feed them. Now, isn't that lovely, you have a new pet! And no litter trays to clear out!


2: Copy and paste this letter into the email form:

I am writing to you today because I would like to highlight some concerns I have about the Health and Social Care Bill which you will shortly be asked to debate.

The organisation 38 Degrees consulted solicitors at Harrison Grant and the specialist barristers Stephen Cragg and Rebecca Haynes about two provisions of this bill - specifically, the impact of the removal of the Secretary of State's duty to provide or secure provision of NHS services, and the impact of competition and procurement law on the NHS. Their full findings may be found at http://www.38degrees.org.uk/page/content/NHS-legal-advice/, but I would like to reiterate the main fears surrounding this bill.

Firstly, I fear that the removal of the Secretary of State's duty to provide or secure provision of NHS services will have one of four effects:

1. There will no longer be a National Health Service

The duty, that Parliament has given the Health Secretary, for ensuring that the NHS provides the service that people need will be lost and the NHS will from here on in simply be little more than a series of quasi-independent commissioning entities and providers, basically free to get on with the job.

2. A loss of accountability - the government will wash its hands of the NHS

Removing the Secretary of State's legal duty to provide or secure provision on health services, and introducing a "hands-off clause", significantly reduces democratic accountability for the NHS. The responsibility for securing the provision of healthcare services will lie with unelected commissioners who will only be accountable to an unelected national quango. The bill will make it impossible for the Secretary of State to direct that certain services are available and difficult for the Secretary of State to step in if these groups deliver poor healthcare to the local community. These changes would shift the main responsibility to unelected officials, representatives of private companies and GPs.

3. A loss of accountability - Local representatives and health watchdogs lose their right to appeal

Because the government is removing the Secretary of State's duty to ensure the NHS delivers an appropriate service, appeals from locally elected council bodies and health watchdogs will no longer be decided by the Secretary of State but - if any rights of appeal survive - a national quango.

Because of changes in the bill there is a real risk of an increase in the “postcode lottery” nature of the delivery of some NHS services. The power to choose what health services are closed or improved in a local area will be passed on to local unelected bodies with little scope for the government to intervene. This will mean patients can no longer expect the government to ensure a consistent level of healthcare regardless of where they live.

Secondly, I fear that opening the NHS up to Competition Law may also have pernicious effects. The Bill contains a number of measures which will increase competition within the NHS at the expense of collaboration and integration and/or make it almost inevitable that UK and EU competition law will apply as if it were a utility like gas or telecoms. This includes:

This could have several effects:

1. Exposing the NHS to UK and EU Competition Law

Taken together, these changes increase the likelihood of NHS services being found by the courts to fall within the scope of UK and EU competition law. The likelihood of this is further increased by other government NHS policies, for example the extension, announced in July 2011, of the right of Any Qualified Provider to be given a contract to deliver health services.

The new commissioning groups will be subject to EU procurement rules whenthey commission local health services. This is likely to be costly, given the likely larger numbers of commissioning groups as compared to PCTs now and our Counsel warns that it appears the government have not planned for this significant increase in cost. Furthermore, it is not clear that the commissioning groups have the necessary procurement expertise to deal with the complex procurement process and to avoid legal action from disgruntled private healthcare providers. This could mean that the NHS ends up spending a lot of time and money fighting legal action instead of investing in patient care. Or worse, it could mean they are reluctant to commission any services for fear of being sued.

3. Create fertile ground for private health companies (and their lawyers)

Companies that bid unsuccessfully for NHS contracts will be able to challenge commissioning decisions in the courts. Private health providers have far more expertise and legal capacity than either public bodies or charities, and so are likely to be best placed to exploit these laws. Litigation could be time-consuming and costly for commissioning bodies.

4. Open our NHS to private companies -  and thus create privatisation by stealth

These plans will lead to a system geared heavily in favour of private companies. The legislation does not currently contain measures to stop:

a) private companies being contracted to provide commissioning services to consortia and therefore profiting from spending multi-million-pound health budgets, or

b) private companies poaching services in a way which undermines the ability of the NHS to deliver essential services like Intensive Care Units, A&E, emergency cover, teaching, training and research.

I wholly believe that this bill is not just unnecessary for the future of the NHS, but actively puts it in danger, and I would like it if you could step in where the Other House has failed and halt this bill in its tracks.

The NHS is one of our proudest achievements as a country. It was created at the end of a war, at a time when our country could have been in ruins. Instead, we banded together to create something wonderful and give everyone, no matter their background, an equal opportunity to live life.

I would like to implore you, one more time, to put a stop to this bill and to allow us to remain proud of one of our country's crowning jewels.

3. Print that letter off and post it to your adoptive peer.

4. Go donate some money to 38 Degrees to show your appreciation


We can beat this if we fight hard enough. Never give up. 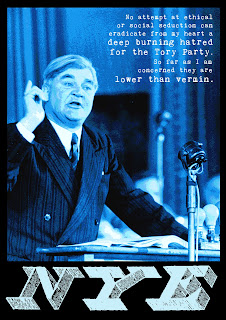