Can sex work exist in an anti-capitalist society?

Yesterday, a friend asked me if I thought sex-work would, or even could, exist in an anti-capitalist society. Having never considered the issue before, I decided to explore my feelings on it, as I think it's a really interesting question.
Disclaimer: What I say here, I say as a person who is very pro-sex worker rights, and do so purely as an intellectual activity in a hypothetical scenario.
Would sex-work exist in an anti-capitalist society?
The first important thing to define here is what is meant by 'sex worker'. My base definition of this would be 'someone who engages in sexual activity with another person for a material reward, where the other person's reward is the sexual activity'.  For reasons of simplicity, I won't include creators of pornography (i.e. actors, actresses, models etc.) in this definition, because there are different issues surrounding that (I can explain this in greater detail at a later point if required).
The second important question is 'what would my definition of an anti-capitalist society be'? I'd envisage a society based on co-operation where everyone's basic needs are met by the people around them. For instance, house building, food growing, education and child rearing could be done in collective groups where everyone brings forth their skills to help reach the end goal. Natural groups would form to cover other desires and aims - for instance, organising gigs, theatre, etc. This may already be seen in several UK anarchist social centres such as Kebele in Bristol and the Cowley Club in Brighton, who organise practical, social and educational events from the skills of their members.
So, would sex work exist in this type of society? I think to examine that we must look at the reasons people get into sex work. Firstly, you have people who are forced in to it through trafficking, abusive partners etc. Hopefully this would not exist, and to discuss it further would cloud the issue. Secondly, you have people who are forced through poverty and personal circumstances into seeing sex work as their best option. In my utopian idea mentioned above, there'd be no one threatened with eviction or starvation to the point where their only realistic choice was sex work, so I will discount these people too.
Finally, there are people who get in to sex work because they genuinely like it and enjoy it as a job, and it is on these I will focus, since they are the ones making the truly free (issues of patriarchy in our real society notwithstanding, and also I am talking about all genders) decision to enter into sex work. I think it would be perfectly possible for people in this category to do sex work in an anti-capitalist society, being a sort of working group (like the plumbers), with the reward they are given being living in a society which takes care of all their other needs. However, a very strong caveat should be the belief that no one ever has a 'right' to sex, and I do not think it should be necessary in a society where I would hope that everyone was liberated enough to make most of the reasons people visit sex workers (can't meet partners, have peccadilloes they feel the need to hide etc.) would be obsolete. This, conversely, could also possibly have the effect of more people wanting to get in to sex work, by de-stigmatising the issue.
I'd like to know people's thoughts on this in the comments. Please, however, remember to be respectful and also that we are debating hypothetical scenarios which have no bearing on the society we are currently in.
Posted by Forty Shades Of Grey at 02:19 16 comments:

Email ThisBlogThis!Share to TwitterShare to FacebookShare to Pinterest
Labels: feminism

Last night I went to a gig. I had a few pints, and I probably danced like a bit of a tit, as I sometimes am inclined to do. I got talking to some people about bands we like, and accepted an invite to go to theirs for a beer. Upon arrival, they (cis men, for the record) got a bit sleazy with me, so I left. Nothing harmful happened (I was pissed off, but whatever).

But let's imagine something did happen. Suddenly, not only would my life be upside-down, what could I do about it? Would I report it? Honestly, no.

If something had happened, and I said something publicly, people would be queueing up to tell me it was my own damn fault. I was drunk. I went to a strange man's house. I was wearing a minidress and leggings. It was late. What did I damn well think was going to happen? Actually, I thought we were going to go listen to some punk music and talk about it while drinking beer. Notice how that previous sentence does not contain the phrase 'have sex'.

I'm not a man-hating feminazi, primarily because such a thing doesn't exist, but also because I'm mates with a lot of guys. So before anyone jumps in with accusations of 'misandry' (also a thing which does not exist, by the way), consider this - I want to hang out with guys. I want to be friends with guys. I want to have sex with guys. I just also want to be assured that if one of those people rapes or sexually assaults me, I won't be blamed just for being in the same vicinity as him while not being a cis-man. What actually IS misandric is the suggestion that no one should be friends with men in case they rape them.

Did you know one third of the UK's population would have said it was my fault if I'd been raped last night? Thirty fucking percent of people think that if a woman touches alcohol, she's declaring open-season on her genitals.

Why am I telling you all this anyway? Well, last night, a hashtag got going on Twitter, titled #ididnotreport. This was inspired by the Mumsnet 'We Believe You' campaign, designed to highlight the hidden problem of rape and sexual assault. On it, thousands of people - men and women told their personal stories of why they didn't report their rape or sexual assault. And it's because of this VICTIM BLAMING BULLSHIT. Some trolls got on the tag, including a confessed rapist by the name of @NiceGuyBrianG (SERIOUS TW for that link), who thinks that the law on spousal rape shouldn't just be reverted, but should apply to anyone in any kind of relationship. Presumably only women should be allowed to be raped, because if I took him back to mine and tried to assfuck him with a strap-on, I'm sure he'd have some quite loud opinions.

I REPEAT, FUCK THAT SHIT.

It is NOT your fault if you are raped. No ifs, no buts. It is only a rapist who decides to rape people. It is NEVER A VICTIM'S FAULT. And I want you all to know that and shout it with me.

Rape apologists, I'm going to give you a quick lesson in human interaction, because you sorely need it: YOU ARE NOT OWED SEX. NO ONE OWES YOU ACCESS TO THEIR BODY. PERIOD.

IF YOU WANT TO HAVE SEX WITH SOMEONE, ASK THEM. POLITELY. IN FACT, IT DOESN'T EVEN HAVE TO BE POLITE. "WANNA FUCK?" WILL USUALLY SUFFICE. IN SOME CASES IT WILL NOT.

IF YOU ARE UNSURE WHETHER SOMEONE ACTUALLY WANTS TO HAVE SEX WITH YOU, WHETHER IT'S BECAUSE OF DRINK OR YOU PRESSURING THEM OR WHATEVER, DO NOT HAVE SEX WITH THAT PERSON.

THE EASIEST WAY TO AVOID BEING ACCUSED OF RAPE IS TO NOT HAVE SEX THAT MAY BE RAPE.

I genuinely can't make that any clearer. If you wish to comment with a wonderful scenario of your concoction about just how gosh-damn tricky it is to not stick your penis in people, I suggest you take your scenario and shove it up your rape-apologising backside. Here's some (long but awesome) posts on consent:

And if anyone feels the need to talk to someone about something that happened to them, here are the details for Rape Crisis (women and children), Pandora's Project (trans* people) and Survivors UK (men).
Posted by Forty Shades Of Grey at 05:30 28 comments:

I love International Women's Day. It's basically Christmas for feminists. This year I'm hoping Solanas Claus brings me some E-Z Burn bras and some genuine emasculated bollocks as earrings. Then we're all going to sit down together to eat whichever man first crossed our path this morning, drink baby blood and be merry.

Joking aside, I bloody do love IWD. It's a great time to celebrate the achievements made by women and get all mushy-eyed about how great feminists are. Yeah, there's some problems. Yeah, we're still way behind on where we should be after this many years of feminist campaigning (not helped by the fact that misogynists keep shifting the goalpoasts - now women in America have to justify not only abortion, but also birth control? In 2012?!), and yes, there are some parts of the feminist scene I really dislike (*side-eyes Jezebel*), but FUCKDAMMIT WE'RE AWESOME.

So, accordingly, I'm going to try and give you a present today. This is going to come in a few parts - first, a blogroll of some of my most-read feminist sites, then my favourite feminist Twitter accounts, then some links to posts about great feminist music and then a SUPER-FUN BONUS GAME which is my gift to all the brilliant lady-bloggers out there.

(Disclaimer: I compiled these lists by looking at who I follow on Twitter. If I'm not sure where someone writes, or they write for multiple sites, I've included their Twitter handle rather than a site. If you're in this category and would like to have a site linked to you, let me know on Twitter. If I've not included you anywhere, it's not because I think you're a shitty feminist, it's because I think you're awesome for other reasons. Or I forgot you, because I'm rubbish. Again, get in touch and I'll rectify this. If I haven't included you because I don't follow you on Twitter, please feel free to add links to your blogs in the comments section - I'd love to see them.)

Also, this International Women's Day should be a time to celebrate fuckawesome music made by women. So here's some posts I wrote about brilliant female bands, which you should go look up right now.

Now, it's present time! Here I give to you, my wonderful feminist friends and inspirations, the Official Forty Shades of Grey Feminist Website Commenter Bingo Card! 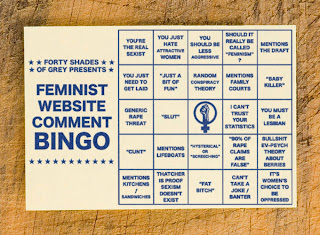 Use it wisely, and keep smashing at that patriarchy. You're all fantastic :)
Posted by Forty Shades Of Grey at 03:41 6 comments: